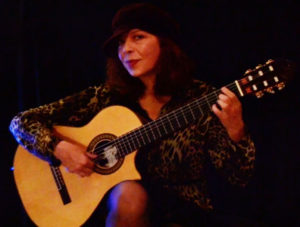 Cristina Rico is a versatile Spanish guitarist and digital illustrator.

Graduated in 1989 at the Superior Conservatory of Music in Valencia (Spain) in the modality of classical guitar. Her musical restlessness inspired her to investigate Jazz Harmony and Brazilian Bossa-Nova.

As a performer, composer and arranger, she has created a personal style with Fingerstyle technique.

She has performed guitar concerts in several countries of Europe and the United States. Mainly as a solo performer, although also in bands of different styles. Her Fingerstyle repertoire is extensive and varied, from Medieval music or Classical Spanish themes, to Bossa Nova, Jazz and her own compositions.

As an admirer of art and its different expressions, in 2014 she graduated at the University of Fine Arts in Elche (Spain). Developing digital illustrations with 3D technique.